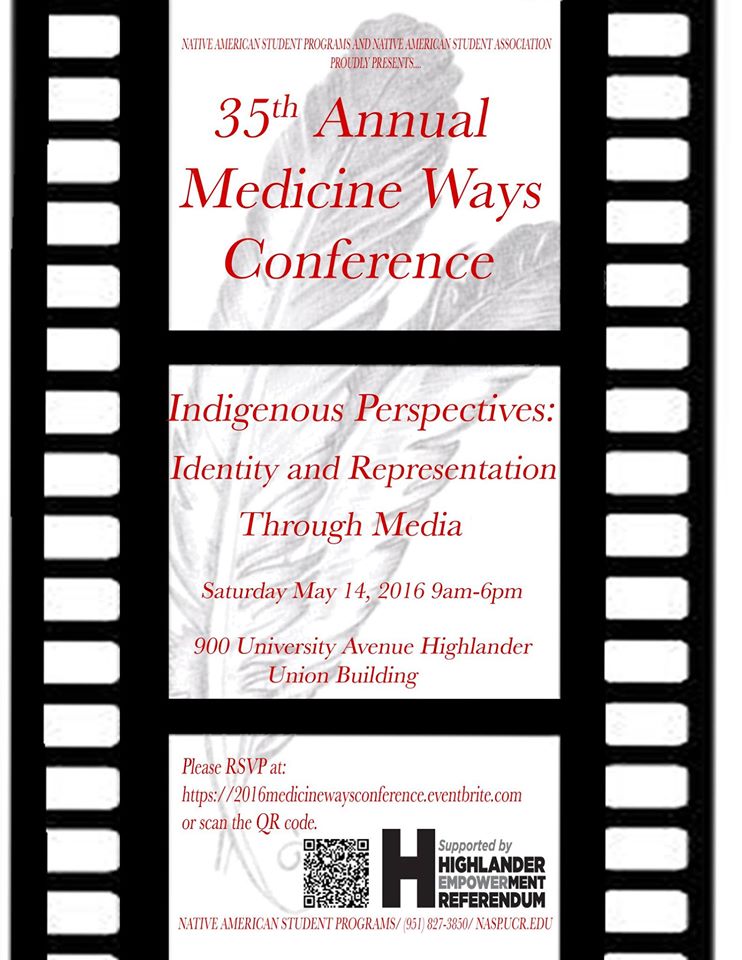 UCR “Indigenous Perspectives: Identity and Representation Through Media” May 14th, 2016

For over three decades, the Annual Medicine Ways Conference has been hosted by the Native American Student Association and Native American Student Programs at UCR. Featured guests from across the nation are invited to partake in this unique event. Various discussions and workshops emphasizing the respected theme are offered throughout the days events. This year our theme is…

Several workshops will discuss Indigenous portrayal through  film, social justice, art, and photography.
In addition to the conference workshops we will have main speakers speaking about native people in the film industry.

The following people are speaking and presenting this year.

Kimberly Guerrero-A native Oklahoman, graduate of UCLA, and current MFA student in Screenwriting at UCR, Kimberly enjoys a career in entertainment as an actor, writer, and director, and also works with at-risk youth in Native American communities utilizing filmmaking as a tool to promote personal and community development. A few of her film and television credits include The Cherokee Word for Water, Bones, Blood & Oil, Longmire, Grey’s Anatomy, Charmed, and Hidalgo—though she is most often recognized as “Winona,” Jerry’s Native American girlfriend on Seinfeld.

Pamela J. Peters is an Indigenous multimedia documentarian born and raised on the Navajo Reservation in Arizona. Her current multimedia project, Legacy of Exiled NDNZ began as a short film that has expanded into a full-length documentary along with an ongoing multimedia component about the history of American Indians living in Los Angeles. To date, she has spoken at USC Annenberg School for Communication and Journalism, UCLA, California State Polytechnic University, Pitzer College, Cal Arts, UC-San Diego, UC-Riverside, UC-Irvine, Occidental College, UC Berkeley, Northwestern University and University of Oregon.

Steven Paul Judd is a Kiowa-Choctaw artist, who fancies pop art, has a knack for comedy, maintains a devoted fan base, and does everything from graphic design to filmmaking to graffiti to writing … to toast art (yes. bread. that kind of toast). Judd studied communications at Haskell and Oklahoma University, but most of what he does he’s learned on his own. His process is unglamorous and admittedly real. He Googles things, watches YouTube tutorials and messes up as often as he succeeds.

Myrton Running Wolf– Myrton is an enrolled member of the Blackfeet Indian Tribe located in Browning, Montana. He was raised near Lake Tahoe, California, by his mother Lillian with his two siblings. Myrton attended Western Michigan University on a full athletic scholarship, and received a Bachelor of Science degree in Mathematics, an MFA in film production from the University of Southern California, an MA in Performance Studies from Tisch School of the Arts at NYU, and a PhD in Theater and Performance Studies from Stanford University.

Jim Ruel is a comedian, writer, and actor. He is an Ojibwe Native American of the Bay Mills Indian Community. He grew up in Milwaukee, Wisconsin where he spent the first ten years of his career performing in comedy clubs around the Midwest. He was a finalist in NBC’s Diversity Talent Search which led to his first television appearance on ‘The World Stands Up’ which was taped in London, England. He was also featured on ‘Goin Native: the American Indian Comedy Slam’ on Showtime. Jim Ruel works in film and media as the Intertribal Entertainment Production Coordinator for the Southern California Indian Center. He recently worked as production coordinator for the upcoming feature film ‘Four Quarters.’

Continental Breakfast, Lunch, and Dinner will be provided.