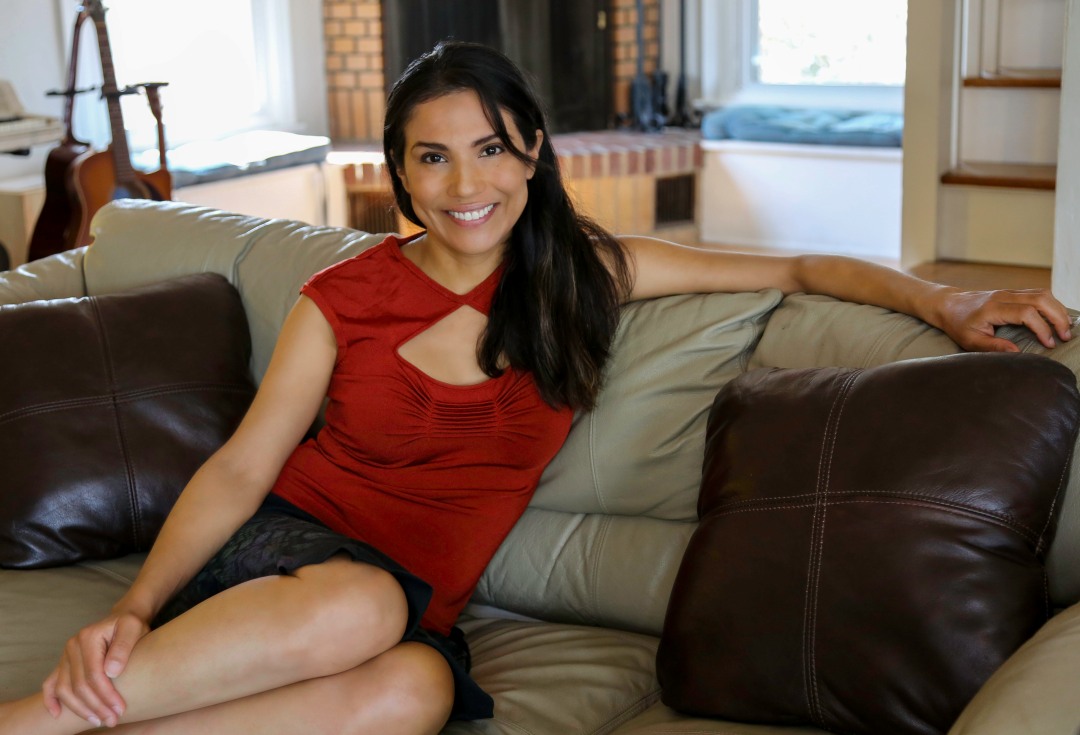 After landing the lead Thunder Heart Woman role in Steven Spielberg’s TNT’s Emmy and Golden Globes-winning epic miniseries Into the West, Tonantzin’s career as an actress emerged. Today she has starred in more than 28 films (IMDB source), and serves as a mentor for the Los Angeles-based theater group Native Voices at The Autry, where she has acted in numerous plays. Tonantzin started her career as a traditional dancer/singer and now is a sought-after actress.

Tonantzin is a descendant of the Tongva and Kumeyaay tribes of Southern California. She grew up in a North Orange County neighborhood within a diverse community, where she describes having Samoan, Vietnamese, Korean, Mexican and Middle Eastern neighbors. North Orange County is much more diverse than what we see in television reality programs. Her step-father, a well-known Aztec dancer, taught her to dance when she was a young child. Her family traveled throughout Indian county as Aztec dancers, performing during the annual Navajo Nation and Apache Tribal Fairs and the near eight-decade-long annual Standing Rock Indian Ceremonial at Wisconsin Dells. Tonantzin loves dancing and has transitioned into choreography, serving as director of cultural dance performances in Southern California. She studied ballet and modern dance while attending UC Irvine. Although her major was in environmental analysis and design, she loved dancing and saw it as a pathway into personal expression. As she shared in an interview with me during our photo shoot on an August afternoon in Los Angeles, she saw traditional dancing as a performative means of expressing her culture, while her training in ballet and modern dance enabled her to branch out into other forms of dancing. Her interest in performing led her to start taking acting courses in college. She made her leap from dancing into acting through a musical theater anti-smoking paid gig that offered her the opportunity to utilize her talents as a dancer, singer, and actor. Through the theater gig, she was able to move to Los Angeles.

While in Los Angeles, she started in small theatrical productions. Her biggest break came when she was cast for the role of the resilient Lakota woman named Thunder Heart Woman in TNT’s Into The West. She is immensely grateful to DreamWorks and Steven Spielberg for this role, which was a very big moment in her 14-year career. Thereafter, she got auditions for lead roles and was able to become a steadily working actress.

During our photo shoot, Tonantzin shared that this year has been very productive and enjoyable. At the beginning of the year, she shot several guest star roles, starting with AMC’s The Son, an American western-style drama series with Pierce Bronson, in which she portrayed a fierce Apache woman, Nascha. She says she can’t divulge much information, as the episodes will not be coming out until later this year. This summer she wrapped her recurring guest star role as Kuruk, a mystical medicine woman, in the zombie apocalypse Sci-Fi’s action-horror series Z Nation. Additionally, she was cast in TNT’s original drama series Animal Kingdomas a single mother of two children. Her character is an independent, strong woman, but as she describes an extortionist too. Playing the character in TNT’s summer’s most popular series was a lot of fun, she reports. Lastly, Tonantzin has been cast as an animated character in a “project in the works” series by Netflix’s BoJack Horsemancreators that will be produced in rotoscope animation — a shot-in-motion transferred to animation style of filmmaking. The producers and writers of the series were meticulous in learning about her cultural background for a part of their storyline, which is not yet announced. However, she has shared that she is looking forward to playing a character that is also named Tonantzin.

She continues to speak about her roles in many film courses throughout the United States, especially her memorable role as the lead character Shayla Stonefeather in Chris Eyre’s 2007 independent drama/horror film Imprint. She appreciates the arc of the character, who is an attorney prosecuting a Lakota teen in a controversial murder trial. The film is currently available on Netflix for viewing.

Tonantzin has been busy, and I don’t think we will stop hearing from her. In the upcoming months, she will be performing with and directing Toveema, a Native performing group that infuses cultural knowledge of Tongva and Kumeyaay through song dance and storytelling. She continues to dance for California Indian Day and Indigenous Peoples Day, which has replaced Columbus Day in Los Angeles and is now celebrated as a day of acknowledgment of Native Peoples. Tonantzin also continues her singing career; she has three musical recordings with Canyon Records and does voice-over work for video games such as The Crew and DeadSpace, for which she plays the ethnic ambiguous character, Kendra Daniels. Another project she was proud to share is her character of Mia in Lego Marvel’s Avenger, as she says’ “I am now a Lego character!”

Tonantzin Carmelo is one of the kindest and nicest persons I’ve met in Los Angeles. She is not only stunning, but she has immense talent as well. Her passion for sharing culture through her projects as a choreographer, mentor and performer is inimitable. The diverse roles she opts to show on screen only gain both prominence and distinction to see as a native person.

So over the years, you’ve been a presenter at the annual AIFI in San Francisco. Can you share how that relationship evolved?

“I won Best Actress in 2006 for Imprint and was able to meet the team that puts on the AIFI through the festival events. Maybe that put me in their minds for host because I was invited to be a host for the first time after that. I think I co-hosted 5 times. A few times with Michael Spears but also once with Evan Adams, Michael Horse and also Eddie Spears.”

How was it like working with founder AIFI Michael Smith?

“Michael Smith was a kind, reserved and a very focused man who was serious about his passion and vision to promote Native performers. His contribution through AIFI to Native performing artist/communities and independent film audiences was immense. I considered it an honor to be part of the long-standing festival that he and the AIFI team made a success year after year and my heart is with them as they move forward.”

Michael Smith from the Fort Peck Sioux Tribe was the founder and director of the American Indian Film Institute(AIFI), he passed away on February 14, 2018. Michael was an advocate for Native actors and filmmakers. Though his annual film festival American Indian Film Festivalin San Franciso he was able to bring native voices to a larger audience.

Tonantzin Carmelo lives in Los Angeles, California. You can follow her on Instagram at www.instagram.com/tonantzincarmelo and view her Filmography at www.imdb.com/name/nm0138371/.