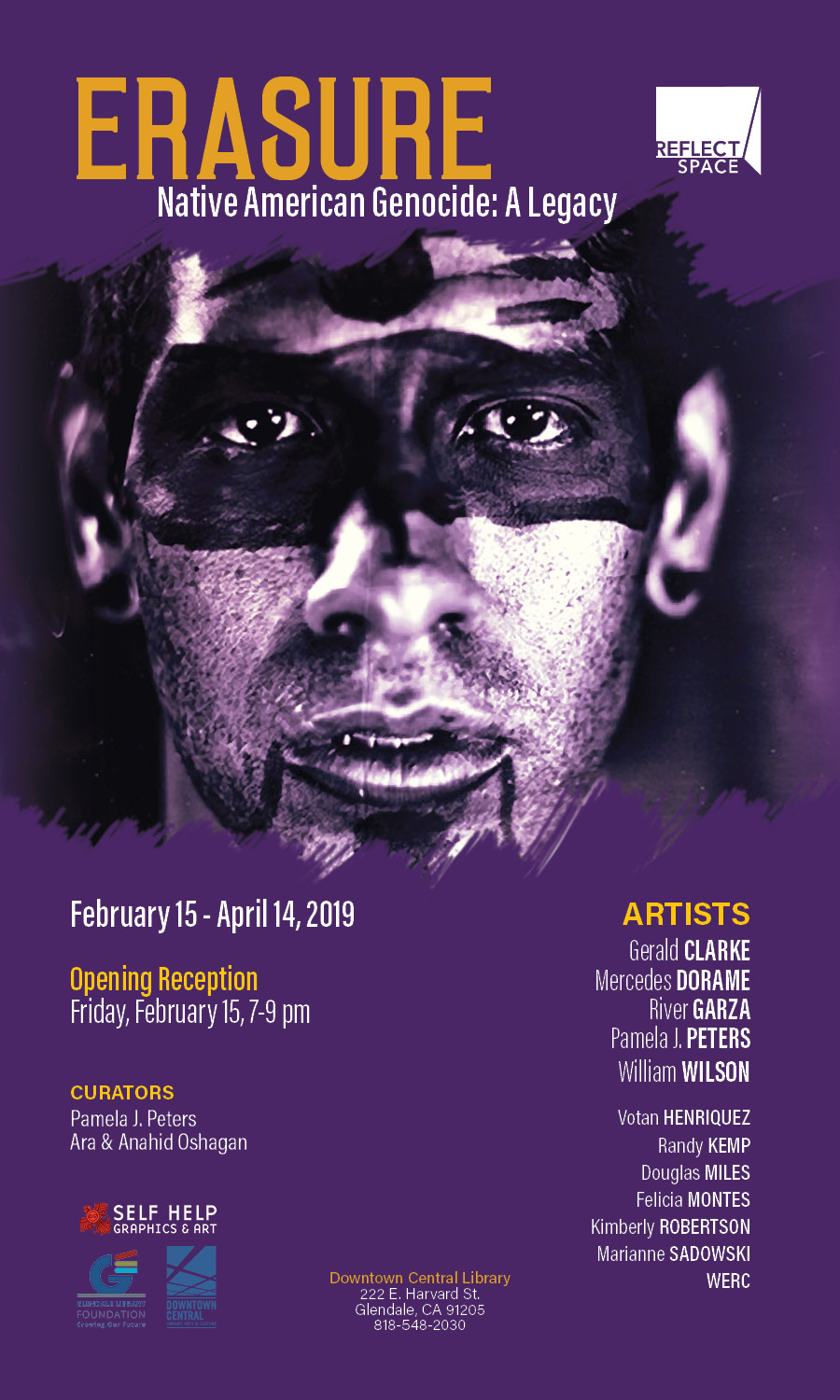 The legacy of the genocide of native populations by the U.S. government and early settlers “remains hidden in plain sight” according to UCLA Professor and Author Benjamin Madley. Madley is the first historian to uncover the full extent of the involvement of state and federal officials, and the taxpayer dollars that supported the indigenous genocide.

Erasure—Native American Genocide: A Legacy at ReflectSpace Gallery brings some of that history into focus. Through the work of Native artists, the exhibit presents work sourced from personal histories and internal/external explorations of Native American identity. The artists aim to bring erasure to light through brazen political imagery, subtle constructions and work that upends ubiquitous Indian stereotypes. They take diverse and bold approaches to reclaiming and redefining their history using their own narratives.

About the Artists
ReflectSpace artists in Erasure: Gerald Clarke, Mercedes Dorame, River Garza, Pamela J. Peters, and William Wilson.
Gerald Clarke is a member of the Cahuilla Band of Indians. He lives on the Cahuilla Indian reservation and his artwork reflects a deep connection to his community and land. In his work one can see an incessant and unsettled search for meaning: employing every and all media, including found objects and so-called “trash” Clarke forces the viewer to re-consider preconceived notions about American Indians.

Mercedes Dorame is likewise deeply connected to her native roots. She uses photography as a way to explore, re-imagine, and connect to her Gabrielino-Tongva tribal culture and bring visibility to contemporary indigenous experience. Much like the fluid and instinctual practices of her indigenous ancestors, Dorame merges and melds multiple artistic media and native materials to create unique installations.

River Garza is a self-taught mixed media artist telling a contemporary narrative of Native people. Raised in Gardena, his work is deeply affected by Los Angeles as an urban space and his tribal Tongva/Gabrielino community. These influences pull Garza’s work in opposite directions but also turn inward and enable him to strike a delicate balance: between dirt and concrete, past and future, peace and violence.

Pamela J. Peters is an L.A.-based Navajo multi-media photographer and filmmaker who upends well-worn Indian stereotypes. In her series titled “Real Ndnz Retake Hollywood,” Native people pose as actors and actresses evocative of the glamorous 1940s era Hollywood. Her work also addresses the “exile” of a whole generation of Indians from the reservation: an insidious and hidden history which is a real and continuing legacy of genocide of her Navajo nation.

William Wilson is a Navajo artist based in Santa Fe who confronts the way American culture is enamored with Native representations from 1907 to 1930 by photographer Edward S. Curtis. His work supplants Curtis’ “Settler” gaze with a contemporary vision of Native North America. Using a large format (8×10) wet plate collodion studio photography process, Wilson employs Curtis’ methodology but subverts the gaze to create unique and contemporary portraits of Native Americans.

PassageWay artists are Votan Henriquez, Randy Kemp, Douglas Miles, Felicia Montes, Kimberly Robertson, Marianne Sadowski. The PassageWay gallery will display a number of serigraphs on loan from our institutional partner, Self Help Graphics and Art in Los Angeles. These works enhance and expand the scope and depth of Erasure.